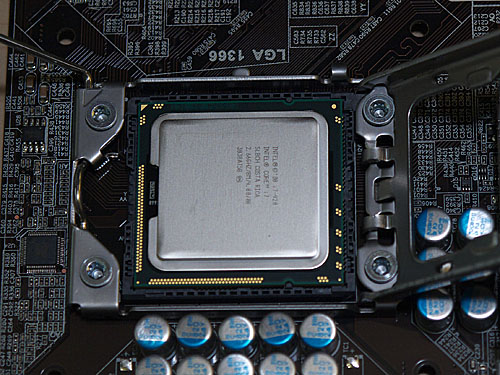 was the latest CPU family from Intel.
Just before Intel announced the Core i7, I almost decided to choose Q9300 or Q6600.
However, the Core i7 cost as much as those Core 2 Quad and performs better according to various review sites.
So, I reconsidered the choice and thought the possibility of the Core i7.

The Core i7 is a quad core CPU, and with Hyper-Threading enabled, it will be seen as eight cores from OS.
Because one of my goals of using this new PC is to experiment multiple threading application with real many cores, it would be better to use a CPU with as many core as possible. So, this is the one I should take this time, from the point of the number of cores.

So, based on the many-core feature and arithmetic performance, I have selected Core i7 family.
Then, Core i7 920 is the cheapest model I can get now.

Here we go! These are boxes of the parts to support the CPU. 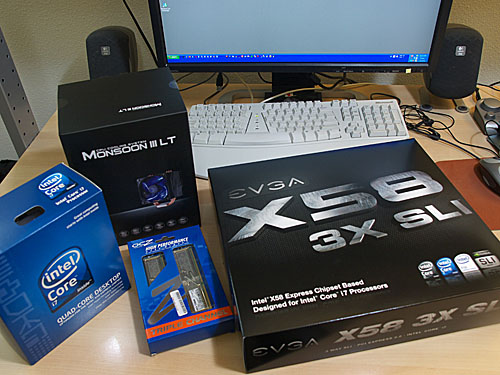 motherboard. It got quite a good user reviews and has nice feature to do OC. (Well, I've never done the OC, but I think I'll try this time for just fun:) This is my first time to use eVGA's motherboard.

. This one was cheaper than other ones, but still got good review. Wow 6GB! It is the largest capacity I have ever had :)

In the photo below, actual parts are shown. 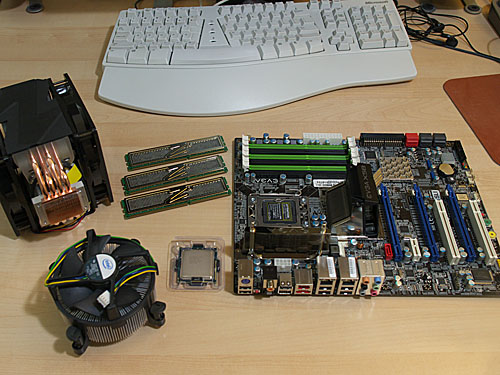 On the left side, you see the huuuuge CPU cooler, which is a "Vigor Monsoon III LT Dual 120mm Fan CPU Cooler".
As I'm planing to play with OC, I just got this cooler for safety (and fun). It's always good to have a good cooling system for any of the parts.
Compare it with the stock CPU fan came with CPU...:)