Saturday, February 09, 2002
By keiji
This is a Windows Application Framework to develop Win32 based windows application

Objective
When I was interested in windows programming in 1993, I used OWL1.0(Object Windows Library from Borland). After short time I used the library, I got interested in how these library is implemented. I studied how to implement event-driven mechanism into C++ class library. At the same time I felt there are many inconvenience in C++. So I designed some classes such as string, file I/O, container, process/thread, etc. The "KWLib" is a summarization of my classes.
I have been developing this library for many years in my spare time. All of my software are developed using this library.

The reasons why I developed this class library from scratch are as follow: 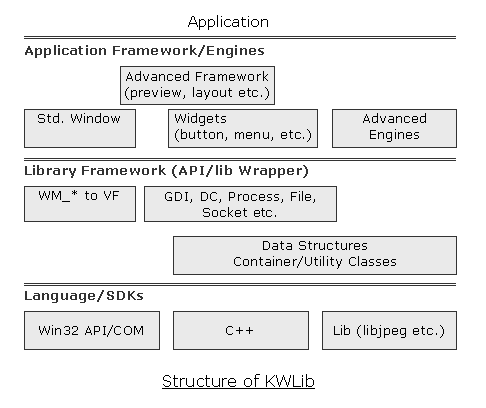 Components
The latest version is kwlib3f-Feb09-2002, which has about 200KLOC (200000 lines of code).
The KWLib is consists of such components as follows: