Thursday, May 31, 2001
By keiji
Software Engineering Methodology is strongly needed to improve software development process. It provides a framework and a way of thinking to develop software.
Here is the ten most important points of software development.


1. Computer Ethics
First of all, what is our responsibility as software engineers? What is a professional software engineer? Software developers have to have guidelines as professionals. These should provide standard for people personally or on an organizational level. There are two major guidelines provided by distinguished organizations. They are:
Please recognize that every person has a different concept and view of software development, therefore, there could be things that you don't agree with above codes. However, it is important for a company to have an explicit policy so that all employees can work from a common foundation.


2. Individual Variation
The productivity of skilled, experienced developers is more than ten times higher than inexperienced developers in every aspect of development. The "Chief Programmer" development method is recommended for fast and solid development. It is similar to a surgical team or an owner-chef. The person who has enough ability to do the task should have full responsibility of decision making power for the task.
I believe in two facts:


We should appreciate a person who has strong skills and ability in both design and programming. 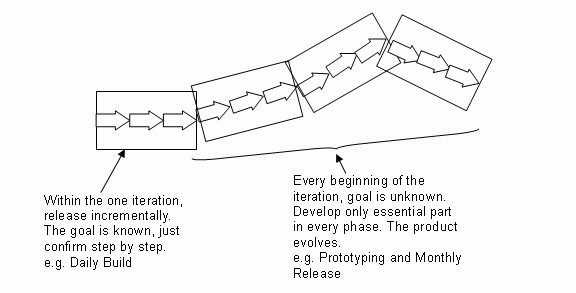 Problems of the traditional Waterfall Model are as follows

It's too late to fix risks later in the project.
The Spiral Model is an improved process.

It is much better than the Waterfall Model in keeping the course of development direction, but still has some risks.

The Agile/XP Model's short process could be much better than the above models, regarding risk avoidance.

Even though the Agile/XP Model seems to be keeping up the requirement direction, it is always important to understand a long-range real goal of the system, which can take a longer period of time in development and contemplation. I believe something between the Spiral Model and Agile Model, depending on the project, will be the best choice.

Please note that even though this Agile/XP Model's short incremental/iteration could reduce the risks, it is valid only if it comes with other disciplines described here. There is no excuse for not having design and documentation.


5. Documentation
Regardless of the project size, we should create a document. Following documents might be useful for most projects:


7. Human-Computer Interaction / Usability Engineering
Easy-to-use is does not necessarily mean easy-to-implement. Knowledge of the Human Factor, Psychology, Cognitive Science, and Behavioral science could be a great help in understanding the user's point of view. To accomplish high usability:


8. Requirement Analysis / Software Design
Prototyping is a good tool to clarify requirements and to communicate with a customer. "Use Case" and "Scenario-driven" design must be introduced in systems development. Visual Design / User Interface Design should be a part of this phase.


Writing a test case is also important when designing and coding.


Actually, testing should be done before and at the time of implementation. A programmer should write unit tests and code simultaneously. Without a unit test, how can you guarantee your code? So, all features/functions should have self-testing codes.


10. Deployment
This includes the user's manual, training, and installing.